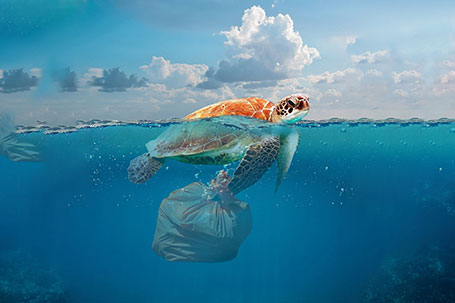 The premise, known for long time, but which is always worth reiterating, is that the pollution (marine and terrestrial) caused by plastics is not due to the material itself but to its incorrect disposal.

In short: it is not the production and use of plastic that is unsustainable, but the fact that, after being used, it is abandoned into the environment rather than being properly discarded, recycled and reused.

This is why the fight against plastic pollution must be conducted on two fronts:

- the production of recyclable and eco-sustainable plastics,

- the adoption of recovery practices for plastic incorrectly abandoned in the environment.

Collect the plastic thrown in the environment

20 tons! It is the amount of plastic waste that is dumped into the oceans every minute.

80% of the waste that reaches the sea comes from land sources and the rest from ships.

Where does this plastic turn out?

1% floats, the rest sinks and breaks down into micro-particles.

While the floating plastic is “easily” recoverable, the part that reaches the bottom of the sea is evidently lost.

To date, there are at least 5 floating "plastic islands" located all over the world, and it is especially in these areas that some virtuous initiatives for the recovery of waste and the restoration of the natural environment are at work.

It is named in this way for its resemblance to the fish: a flat diamond-shaped disc. The boat can collect, in a single expedition, up to 600 cubic meters of waste which is sorted and compacted on board, before being unloaded on the mainland.

It costs a fair amount (30 million euros) and its departure to hunt for waste is scheduled for 2022. Of course, it would take a fleet to collect all the residues that crowd our waters today. Perhaps, when it begins to lead by example, others will follow.

Its conveyor belts will submerge up to one meter below the surface of the water, thus collecting floating waste.

Designed by two young French engineers, the oceanographic catamaran will begin its world tour shortly. The "eco-heroic" boat plans to make 33 calls in three years to collect waste from the sea and along the coasts. Recyclable plastics will be transformed and reused, and non-recyclable plastics will be converted by pyrolysis into fuel, which will power the ship's engines.

Boyan Slat is 23 years old and he has designed a series of about 30 filtering barriers two meters long each which, installed in the Pacific area, should clean 90% of the surface occupied by waste. The project is called Ocean Cleanup and has been running since 2019.

Prevent is better than cure.

Alongside the projects created and developed to solve the damage caused by the incorrect disposal of plastic, it is also necessary to act in advance, studying and producing materials with similar characteristics but with a lower ecological impact.

These water-soluble and non-polluting plastic bag comes from Chilean technology. The new material was obtained by replacing petroleum with a limestone derivative and so the new bag dissolves in a few minutes, leaving only the carbon in the water (harmless to both humans and the environment).

Our commitment has long been in the direction of research and production of bio-based films (sugar cane) and with very low densities, able to float on water if mistakenly dispersed in water.

Creative use of recycled plastics

PlasticRoad: roads built with plastic collected from the oceans

The goal of the Dutch project is to replace the asphalt used to build the roads with recycled material from ocean plastic waste. The new roads would be more resistant to extreme temperatures, more waterproof and would have a lifespan three times longer than those made of traditional asphalt.

In India, this process is not new: almost 10,000 km of plastic roads have already been built in 11 cities on the Asian continent.

For 10 years, the Spanish brand Ecoalf has been using saturated polyester collected from the Mediterranean Sea to produce clothing and accessories. The high-end collections aim to launch a "new generation" of sustainable ready-to-wear.

In 2017, 750 houses were built in Bogota using around 100 tons of waste per month. In addition to the ecological aspect, houses built with this method are also cheap and quick to make: with less than $ 300 and two tons of recycled materials, future owners will have their “nest” ready in a week.

Plastic Whale: the plastic taken from the Amsterdam canals they become furniture

The boats cross the canals of the Dutch city collecting waste that will be used for the production of furniture, and meanwhile take tourists for a walk.

A few numbers? 146,000 plastic bottles, 2,914 garbage bags and the equivalent of 9 boats full of plastic garbage have already been collected.

The first bacterium that eats polyethylene terephthalate (PET), found in plastic bottles, was discovered in 2016. By manipulating these bacteria, American and British researchers have designed an "even more effective" enzyme for devouring plastic.

Scientists now want to improve the performance of this enzyme to use it in an industrial process for destroying plastic.

A plastic-eating caterpillar, Galleria mellonella, is also on the test bench in the laboratories.

The Cameroonian organization Madiba et Nature, recovers used bottles that float in the oceans and rivers to build boats to be used to ferry tourists or to fish.

The organization thus encourages ecotourism and offers a training program to young students and engineers who want to commit to the environment.